And the Cue Goes To… 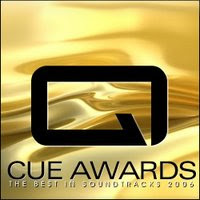 Once again, the Oscars have come and gone. Also coming to a close are the 2006 Cue Awards, where members of the Tracksounds team (including yours truly) honor various achievements in film scoring. Awards include Best Score Missed by Oscar, Best Score for Television, and Best Score as Heard in Film. Kudos to Christopher Coleman for creating a great layout for this year’s awards, with each category getting its own visually appealing web page.
Cue Awards Film Scores Oscars

From a concerned reader (with a few slight edits): Your argument robs adult women of agency because it says outright that they are not consenting and implies they cannot consent . It infantilizes adult women and asserts that they can only be protected by men with a white knight impulse. We’re getting into an area where women are regarded as little more than sheep, being led by whatever crook is nearest. As regular visitors know, over the past few years I have focused much of my blog’s attention on how the entertainment industry places pressure on actors to perform nude and/or sex scenes for audiences. It’s a problem that is at once both tacitly acknowledged and blithely ignored. I have argued further that those who suffer most under this burden are actresses. With my emphasis on women, some readers have responded with major concerns. I am both thankful for and alarmed by this feedback, because the quoted critique above is not what I have meant to communicate. Not at al
Read more

A few days ago, an international Christian ministry I greatly respect published an article critiquing the new movie Captain Marvel . I found the article to be confusing, troubling, and even dangerous. It doesn’t so much critique the content of the movie as it does the existence of the movie and the reason for the movie. Those are issues I can address without having first watched the film (which, for the record, I have not). As I see it, there are four main problems with the article: 1) unclear language, 2) genre confusion, 3) the appearance of reverse chronological snobbery, and 4) the appearance (unintentionally, to be sure) of a demeaning attitude toward women. 1. Unclear Language The article’s author, Greg Morse, pushes back against what he calls the “feminist agenda,” but he never clarifies what that term actually means. The truth of the matter is that feminism, like many other ideological positions, is too broad a description to condemn or praise outright. One mu
Read more