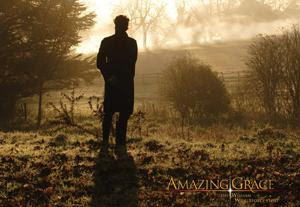 The legacy of William Wilberforce is tied to his relationship with John Newton. John Newton, an ex-slave trader turned minister and abolitionist, wrote the lyrics for the hymn Amazing Grace and became Wilberforce’s spiritual counselor. He set his young protégé on the path of service to humanity. It was only after Wilberforce underwent what he later described as his “great change” or embrace of Christianity, that he became a reformer. Newton knew this to be true, and invoking the deliverance language of the Old Testament Book of Esther, told Wilberforce that it was “for such a time as this” that he had been placed in a position as a powerful Member of Parliament to secure the abolition of the slave trade. It was in the House of Commons, Newton stated, that Wilberforce could best serve God.

Furthermore, the original motion picture score is composed by David Arnold (Stargate, Independence Day, The World is Not Enough). I’ve heard over an hour’s worth of music from the movie and it is gorgeous! Here’s hoping for an official score release…
history movies