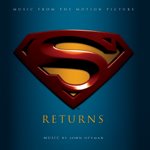 Even though Superman Returns lasted two-and-a-half hours, it felt like a mere 90 minutes. I enjoyed almost everything about the film—except for the unexplained motivations and inexplicable occurrences that detracted from the intended thrills of the third act.

For me, the greatest thrills were provided by the music, composed by John Ottman. He masterfully integrated the familiar themes John Williams composed for the original film with some beautiful and rousing new material of his own. The music is absolutely astounding (with some excellent choral work)! Definitely my choice for the highlight score of the year thus far.

Don’t succumb to indwelling sin by shrugging your shoulders and saying, “Whatever, Cap. You’re a nerd.” Think about it: the next time you surf the web, you could listen to Superman Returns as background music. You needn’t listen to the entire score, but give the first twelve minutes a try (at least). Don’t miss out on this listening enjoyment opportunity. It’s great stuff!