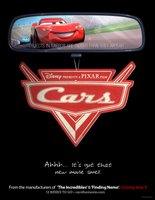 Cars is the longest Pixar film to date (beating The Incredibles by a scant sixty seconds), with a sometimes-sluggish and less-than-original storyline, a small amount of surprisingly racy humor (pun intended), a mediocre musical score, and less funny/witty moments than are found in typical Pixar fare…and it is still better than anything else recently released by Hollywood.

Through a series of unfortunate events, a self-centered racecar, Lightning McQueen, is stranded in a tiny mid-western town on his way to California to compete in a race for the Piston Cup. Through his interaction with the local inhabitants, Lightning learns important lessons about life’s priorities. True to Pixar originality, the climactic sequence ends in a decidedly anti-Hollywood way, giving the film’s somewhat clichéd message a large does of moral potency.

There aren’t enough effective adjectives to describe Pixar filmmaking. Compare the “cow tipping” jokes in Cars to those in the Open Season trailer. One makes you laugh your head off, the other makes you barf your intestines out. Cars may fall behind the pure brilliance of previous efforts like Toy Story and Monster’s Incorporated, but even bad Pixar is still good filmmaking.