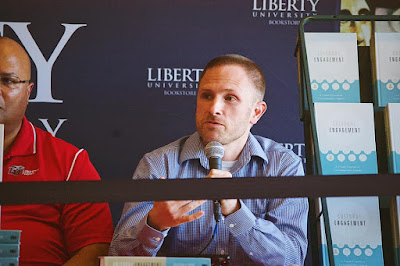 Recognized by Zondervan Academic as one of the top Christian thinkers on sexualized entertainment, Cap Stewart is a contributor to the anthology Cultural Engagement: A Crash Course in Contemporary Issues, released in 2019. Cap has written for several other print and online publications, including The Gospel Coalition, Covenant Eyes, and Reformed Perspective.

After seven years of research and writing, Cap released the online course Personal Purity Isn’t Enough: The Long-Forgotten Secret to Making Scriptural Entertainment Choices. Inspired by a combination of Scripture, church fathers, and modern-day testimonies from entertainment insiders, this course is the first and only of its kind—eschewing both the legalistic pitfalls of purity culture on the one hand and the freedom-toting licentiousness of progressive ideology on the other.

As a writer, speaker, and independent business owner, Cap has developed his love of stories through drama, radio, freelance writing and editing, videography, independent filmmaking, and collecting and reviewing film scores. He enjoys long walks on the beach with his beloved bride every decade or so. Other than that, he prefers remaining inland, inside, encapsulated in his office, breathing fresh filtered air while typing away at his keyboard. He has been writing about theology and the arts since 2006. He currently publishes his regular writings at https://capstewart.substack.com.