Confessions of an American Driver 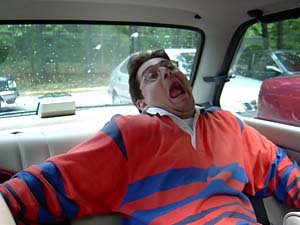 Sometimes, interesting things happen when you’re driving. Below are a few incidents that have taken place in the past couple days. Actually, one of the items below is not true. Can you guess which one? (I’ll eventually let you know.)

Jennifer Sagraves said…
Cap...can I get a ride to SPAM tonight?
2:00 PM

Cap Stewart said…
Okay, for anyone who's wondering: it's the squirrel story that is false.
7:08 AM

Anonymous said…
Whatever, Cap. I know it's the dead dog story. That is SO NOT TRUE!
9:58 AM